Effective Saturday, March 6th at 7am, we have updated both hospitals' Visitation Policy: Non-COVID visitors are now allowed 2 support persons, without ability to rotate (end-of-life visitors are allowed to rotate). 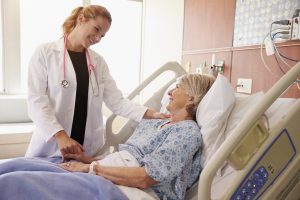 For most uterine conditions, if available non-surgical treatments fail to relieve symptoms, many women choose a more certain result with elective hysterectomy. Each year in the U.S. alone, doctors perform about 600,000 hysterectomies, making it the second most common surgical procedure.

While symptoms such as chronic pain and bleeding often point a woman and her doctor toward hysterectomy as the preferred treatment choice, life-threatening conditions such as cancer or uncontrollable bleeding in the uterus often necessitate a hysterectomy and follow-up treatment.

While hysterectomy is relatively safe, always ask your doctor about all treatment options, as well as their risks and benefits, to determine which approach is right for you. And if hysterectomy is recommended or required, you owe it to yourself to learn about da Vinci Hysterectomy, a robot-assisted, minimally invasive surgery that for many women has potential as the safest and most effective treatment available.

RMC GYN physicians perform several types of hysterectomy – the surgical removal of the uterus – to treat a wide variety of uterine conditions. Each year in the U.S. alone, doctors perform approximately 600,000 hysterectomies, making it the second most common surgical procedure.

There are various types of hysterectomy that are performed depending on the patient’s diagnosis:

Surgeons perform the majority of hysterectomies using an “open” approach, which is through a large abdominal incision. An open approach to the hysterectomy procedure requires a 6-12 inch incision. When cancer is involved, the conventional treatment has always been open surgery using a large abdominal incision, in order to see and, if necessary, remove related structures like the cervix or the ovaries.

A second approach to hysterectomy, vaginal hysterectomy, involves removal of the uterus through the vagina, without any external incision or subsequent scarring. Surgeons most often use this minimally invasive approach if the patient’s condition is benign (non-cancerous), when the uterus is normal size and the condition is limited to the uterus.

In laparoscopic hysterectomy, the uterus is removed either vaginally or through small incisions made in the abdomen. The surgeon can see the target anatomy on a standard 2D video monitor thanks to a miniaturized camera, inserted into the abdomen through the small incisions. A laparoscopic approach offers surgeons better visualization of affected structures than either vaginal or abdominal hysterectomy alone. 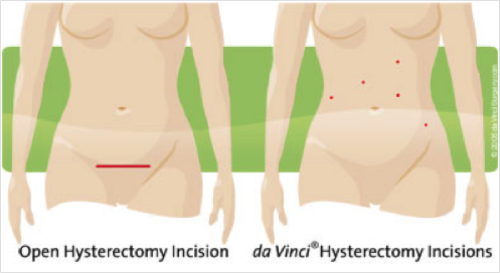 If your doctor recommends hysterectomy, you may be a candidate for da Vinci Hysterectomy, one of the most effective, least invasive treatment options for a range of uterine conditions. da Vinci Hysterectomy is performed using the da Vinci™Surgical System, which enables surgeons to perform with unmatched precision and control – using only a few small incisions.

Moreover, da Vinci provides the surgeon with a superior surgical tool for dissection and removal of lymph nodes during cancer operations, as compared to traditional open or minimally invasive approaches.1 da Vinci Hysterectomy also allows your surgeon better visualization of anatomy, which is especially critical when working around delicate and confined structures like the bladder. This means that surgeons have a distinct advantage when performing a complex, radical hysterectomy involving adhesions from prior pelvic surgery or non-localized cancer, or an abdominal hysterectomy.

As with any surgery, these benefits cannot be guaranteed, as surgery is both patient- and procedure-specific. While radical hysterectomy or abdominal hysterectomy performed using the da Vinci Surgical System are considered safe and effective, these procedures may not be appropriate for every individual. Always ask your doctor about all treatment options, as well as their risks and benefits.